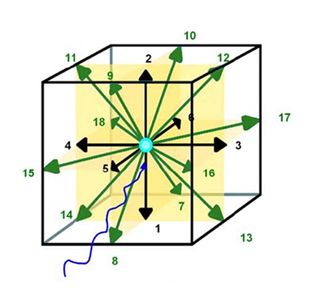 The lattice-Boltzmann method has recently emerged as a powerful tool for solving challenging flow problems. It is an alternative approach to Navier-Stokes equations for Computational Fluid Dynamics (CFD). ProLB’s fluid dynamics solver is based on the lattice Boltzmann method (LBM) and draws many of its advantages from it.

While Navier-Stokes equations consider fluid motion on a macroscopic scale, the lattice Boltzmann method describes particle physics on a mesoscopic scale. In LBM, a gas is represented by a cloud of like-point particles and described by its continuous distribution function. In contrast to Navier-Stokes solvers which need to treat the nonlinear convection term, the LBM does not include such nonlinearity.

Such simplicity in the LBM formulation means it is extremely simple to code and allows it to be particularly well-suited for massive parallel computing. LBSolver is based on the D3Q19 scheme with a double relaxation time (DRT) collision operator designed to maximize numerical stability and performance without compromising accuracy at high Reynolds numbers. Despite having the same theoretical order as more traditional approaches, the LBM scheme employed in LBSolver is inherently less dissipative and less dispersive.

Turbulence modeling in LBSolver is based on a Wall-Modeled Large Eddy Simulation (WMLES) approach. As in most LES approaches, a sub-grid scale model is added in order to account for non-resolved scales. This LES approach is combined with a proprietary wall-treatment which takes into account near-wall turbulence effects, adverse pressure gradients and curvature effects.